The Promise: A True-Crime Series about Jens Soering, Elizabeth Haysom and a 1980s-Era Double Murder

THE PROMISE: A TRUE-CRIME SERIES ABOUT JENS SOERING, ELIZABETH HAYSOM AND A 1980s-ERA DOUBLE MURDER

THE PROMISE begins in 1984 at the University of Virginia, USA. Jens, a highly gifted student from Germany, falls in love with fellow student Elizabeth Haysom, an attractive, experienced young woman from a privileged background. Their passionate campus love story turns into a nightmare when Elizabeth’s wealthy parents are murdered in an act of inexplicable violence. Jens confesses to the murder only to later recant. The young German’s murder trial — one of the first to be broadcast live on television — makes international headlines and Jens serves nearly three decades in American prison. German former President Christian Wulff, best-selling author John Grisham and actor Martin Sheen are among the many who support his fight to prove his innocence. 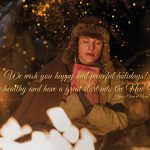